Instagram will soon to get a new option of save stories as drafts to continue editing later. The Company says that this feature is a work in progress and didn’t share a specific timeline as to when users should expect it.

The Company first took to Twitter to confirm that it was working on a story draft feature. In its tweet, the company said that the users will soon be able to finish what you started with story drafts. 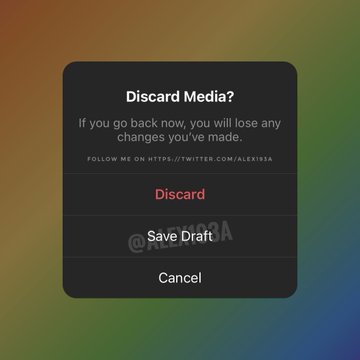 There are several different ways to post content on Instagram. There are standard feed posts, stories, story highlights, IGTV Video capabilities, and the most addition Reels.

If a user tries to get out in the middle of story creation, Instagram will bring up a dialogue box that gives the user three options – Save Draft, Discard and Cancel buttons.

The Users can see a new ‘Save Draft’ option between the Discard and Cancel buttons. The “Discard” option will let users discard the story and start with a fresh one. This option will erase all the data’s and will not be able to recover them.

The “Save Draft’ option will let users to save their story edits in draft. Tapping it will stash whatever you were doing into a drafts folder, which you can pull up anytime from the stories menu.

The “Cancel” option will makes the dialog box disappear and lets users go back to story creation.

The feature will have a positive impact on all kinds of Instagram profiles whenever it is eventually brought to the masses.