OnePlus is planning to introduce its digital payment service in India soon. A new certification now suggests that the company will soon be bringing OnePlus Pay to its users in India too.

The screenshot shared by Mukul Sharma on Twitter show that trademark filed by OnePlus for OnePlus Pay in India and accepted by the Registrar of Trademarks. 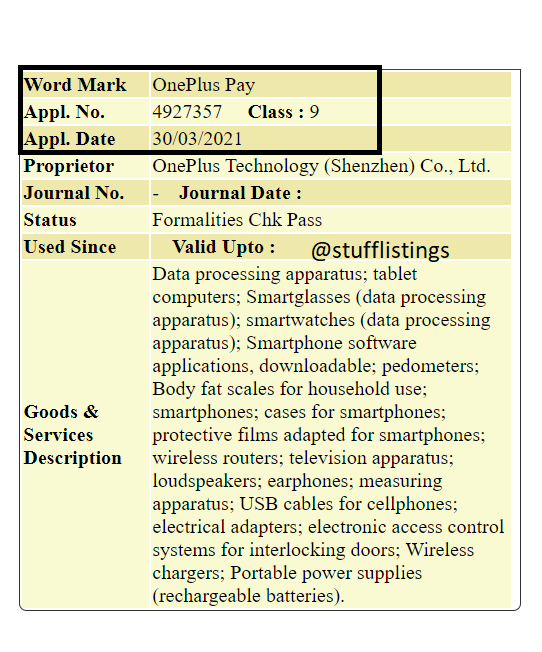 OnePlus has been expanding its footprint in India over recent years. OnePlus Pay is expected to be the next big service from the brand and it will likely launch later this year.

The mobile payments service was first announced in 2019 and was subsequently launched a year later in China.

OnePlus Pay was launched in March 2020 and is only limited to China at the moment. To use the service, OnePlus users will have to set the app as their default NFC-based payments app and after entering their bank details, the service will be activated and ready to go.

OnePlus Pay allows users to make transactions using any wallet app such as GPay or PayTm and also supports near field communication (NFC) based money transfers. The company has said that its service is faster than the others in the Chinese market like WeChat and Alipay.

OnePlus Pay will be the brand’s competitor to the likes of Google Pay servings as a digital wallet and payment service.

The digital payment service works with the pre-loaded Wallet app, and users have to set the OnePlus Pay as their default NFC-based payments app. To pay via the NFC-based platform, users can double-press the power button to quickly access the OnePlus Pay.

The company is likely to offer introductory rewards to those who use the OnePlus Pay.

These might be in the form of cashback, discounts on payments and more to lure the customers into using the app for their digital payments.

OnePlus will likely partner with Indian banks or international payments gateway like Mastercard and Visa that are widely popular in the country.